The Falcon 2000 is a twin-engine French-made business jet and is essentially a slightly smaller development on the Falcon 900 trijet, with United States transcontinental coast to coast market range.

The Falcon 2000 jet comes with fault monitoring and digital diagnostic systems, which help the mechanic in troubleshooting and repair work.  Most parts of the airplane are positioned to be easy for mechanics to reach and maintain.  The Falcon 2000 was designed to spend as little downtime in the shop as possible.

Dassault introduced the Falcon 2000 as the Falcon X in 1989 and carried out the development of the aircraft in partnership with Alenia. The first flight came in 1993 with entry into service in 1995. A total of 231 Falcon 2000 business jets were built, 1 is retired.

The Falcon 2000 was the first private jet that Dassault designed without a physical model.  Its design was completely digital, created by Computer Aided Three-dimensional Interactive Application (CATIA) software. This software helped improve aerodynamic structure and simplified the airplane’s systems. 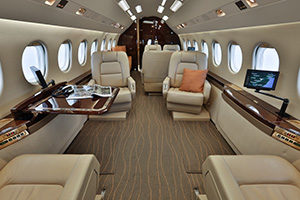 Two General Electric/Honeywell CFE738-1-1B engines power the Falcon 2000 each offering 5,918 pounds of thrust and using a combined 283 gallons per hour (GPH). The range of the Falcon 2000 is 3,052 nm operating under NBAA IFR 4 passengers with available fuel.

The cabin volume for the Falcon 2000 is 1,028 cubic feet. Typical configuration features 8 passenger and 2 crew seats.

Click Here to view Dassault aircraft for sale by Jetcraft.

The aircraft pictured in this Overview is Falcon 2000 sn 131.

Product Overview The Challenger 350 is a super mid-size business jet offering transcontinental range and a ten-passenger cabin configuration. An upgraded variant of the Challenger 300, this improved model offers…

Jetcraft is the launch customer for interiors specialist F/LIST’s Microshield 360 treatment program, which protects against SARS-CoV-2* and other pathogens that may otherwise live on cabin surfaces. Additionally, Jetcraft is…

Ashley Bolger, Regional Marketing Manager (EMEA) Location: London, United Kingdom How long have you been at Jetcraft? Just over 2 years. What are your responsibilities within the global Jetcraft team?…

Patrick Stewart, Corporate Accountant Location: Raleigh, NC, US How long have you been at Jetcraft? I have been working on the accounting team at Jetcraft for 3 and a half…