As of May 2022, 32% of Learjet 75 aircraft were purchased pre-owned by their current owners, the other 68% new. 1.5% are for sale with half of those (50%) under an exclusive broker agreement. When for sale the average time on the market is 98 days.

Bombardier received FAA certification for the Learjet 75 on November 14, 2013 and it entered service shortly thereafter. The aircraft received the European Aviation Safety Agency (EASA) certification in September 2014 and the 100th Learjet 75 was delivered in June 2017. A total of 137 Learjet 75 aircraft have been built with 135 in operation.

The new Learjet 75 Liberty model, a lower-cost version, is now in production with the first delivery in October 2020. The Liberty lower cost is achieved by replacing 2 seats in the forward cabin with two-fold down ottomans and fold-out tables, creating an “executive suite” and an aft 4-place club.

There are 137 Learjet 75 in operation today. The majority of those (125) are wholly owned, with 1 in shared and 9 in fractional ownership. 8.1% are currently leased. North America has the largest percentage of wholly owned Learjet 75 aircraft (83%), followed by Europe (10%) and South America (6%). 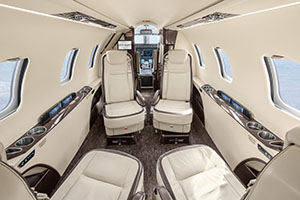 Two Honeywell TFE731-40BR engines power the Learjet 75 each offering 3,850 pounds of thrust and using a combined 214 gallons per hour (GPH). The range of the Learjet 75 is 2,026 nm operating under NBAA IFR 4 passengers with available fuel.